Unfortunately, our kitchen is, while much bigger than previous ones, not really laid out well for working together 1. Unless one person’s job is washing dishes while the other person cooks and preps. Which isn’t really working together on creating something tasty. And that is exactly what Chris wanted to do on Sunday afternoon. We kind of had to tag-team on the various tasks but we made it work. And we got something really incredibly tasty out of it.

I’m not much of an egg eater. Not that I’m pointing fingers but my dad used to make ‘Army’ scrambled eggs which were pretty awful, to my six year old palette at least 2. It wasn’t until spring break my junior year of college that I willingly ordered an omelet. Actually, I at a lot of omelets that week- our hotel had an IHOP restaurant but there was no way I could eat pancakes and waffles everyday for 7 days. I needed protein in the morning because we’d have plenty of carbs later on. Since then, I will have the occasional omelet or scrambled eggs but I’m exceptionally picky and don’t have much interest in making them for myself. The omelet short list at present is really short: my husband, Sawyer’s Pancake House in Lansing. Sophia’s in Grand Ledge does a pretty good job but its way too big and sometimes not cooked evenly.

Now quiche and frittata and other egg-y pies have been way down on my list. I’m pretty sure I was subject to some spinach quiche that I found revolting both due to the eggs and presence of cooked spinach as a kid (note: don’t have a problem with spinach now). Might have even had brussel sprouts, lima beans or cauliflower associated with it- all verboten in my kid-self world3. So I don’t order them, I don’t make them, I don’t even consider them on the menu at a restaurant. If we and other people make quiche like the one Chris & I made though, I’d probably eat more quiche.

Using a combination of two recipes (one from Food Network: Quick quiche and one from Elise at Simply Recipes: Mushroom Quiche as jumping off points, we came up with this. 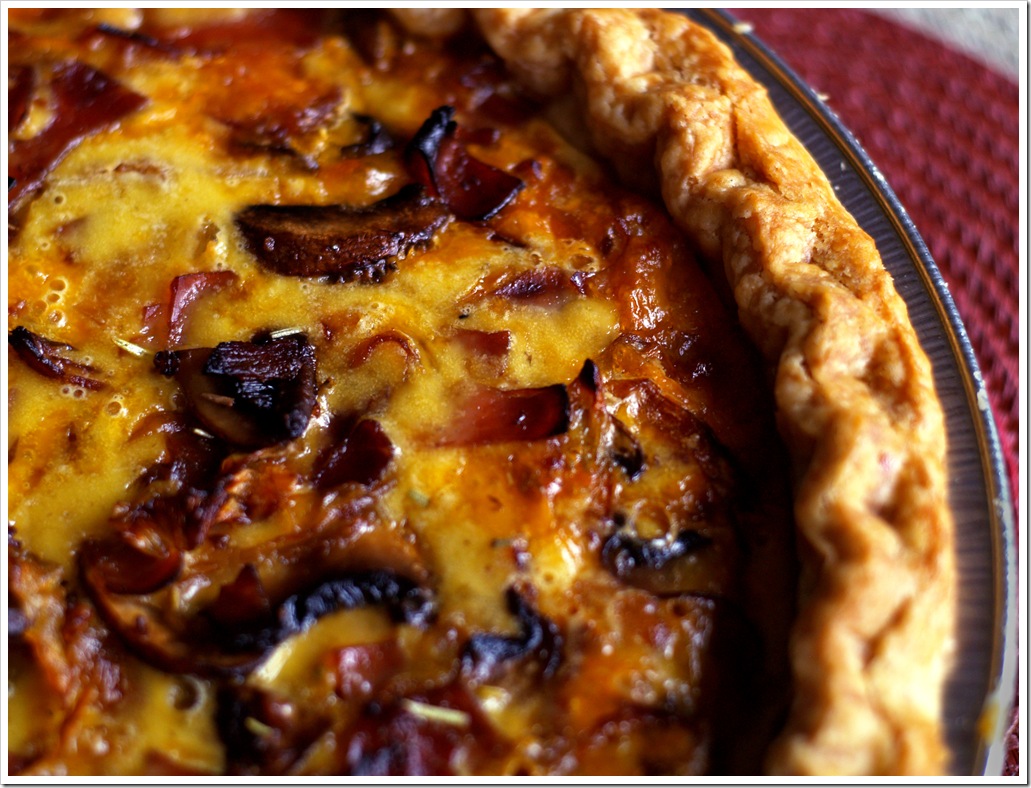 1. Caramelize onions: if you do this right, it takes a while so you may choose to make a big batch and then just use what you want (about 1 onion worth) for this dish. To caramelize, heat 1 tabelspoon butter and 1/2 tablespoon olive oil over medium-high heat. Add thinly sliced onions a pinch of salt and a pinch of sugar (optional), stir to coat and then leave them alone until they start to turn golden, almost brown on the edges. Reduce heat to low. Stir only occasionally. Continue to cook until browned to your liking. You may also let them get crispy, like we did. Sort of accidental.

2. Prepare remainder of filling: Remove onions from pan. Return heat to medium-high and add 1/2 tablespoon oil. Add one to two cloves garlic and cook just until fragrant, about 30 seconds. Add mushrooms and a pinch of salt plus 1 1/2 teaspoon dried rosemary. Cook mushrooms until they have released all their juices and the pan starts to look a little dry. Add chopped ham and cook another 2-3 minutes. Stir in reserved onions then remove from heat.

If using a pre-made pie shell, prick with a fork several times and place in oven for about 5 minutes. This step may not be necessary depending on the brand of shell

5. Cook: Bake in oven for approximately 35 minutes. Remove and let rest 5-10 minutes before slicing and serving. May be served hot or at room temperature.

While writing this post, I started thinking about the egg-based breakfast/brunch items and realized I wasn’t sure if we’d made a quiche. What makes a quiche, quiche? After perusing the highly informative site, Mr. Breakfast4, I determined that quiche was probably right even though we didn’t use actual cream. Frittatas don’t have crusts. There are also souffles; the best (and probably only one I’ve had) one of those can be had at the Featherbed Inn near Waitsfield, Vermont. And pie which sounds a like like quiche but with far more other ingredients. Come to think of it, we may have made a pie. I don’t know that quiche requires a minimum egg to filling ratio but this was not an uber-eggy dish. But it was delish!

1Smallest kitchen I ever had was while in college, living near the Green Door in downtown Lansing. A one-sided galley, the only counter space was just wide enough to hold a microwave (hey, I was in college) so I learned to be creative with prep work. This was also my first experience with a gas stove. I lit a lot of pilot lights that year!

2 Again, not pointing fingers but my dad (and brother) are also known for their creative versions of mac n’ cheese, when there is no milk. Or no butter. For what’s it worth, if you try to make the boxed version with just water, you get yellow wall paper paste that even our dog wouldn’t eat.

4Neat site for all things breakfast. If I didn’t think it was criminal to get up before the last possible minute, I’d probably make and eat more breakfast items during the week. Not that I’m about to have an epiphany but this site might convince me to get up earlier, at least on Saturday or Sunday (but not both- baby steps people!).

View all posts by Courtney

Bites on the go