For the longest time I have been no fan of Cracker Barrel.  A few months ago, Chris and I ended up going to the one on Lansing’s west side, his choice.  I figured I’d make do but I wasn’t really excited.

After the meal, I was still not very excited about Cracker Barrel but I wasn’t feeling so negative. I had a sandwich and soup. Really, the sandwich was quite good but the soup wasn’t what I expected in a Corn Chowder.

After I thought about it, I realized that my ill will towards Cracker Barrel is partly a mental confusion with Old Country Buffet.  Now that is a place I really don’t want to go to, ever again.  I’m not much for the buffet-style dining due to cleanliness concerns.  I won’t eat at a buffet restaurant unless I can observe the buffet lines for a few minutes first.  I had a particularly bad experience at OCB way back in high school. On the same trip (marching band competition) we also ate at Cracker Barrel.

So, after realizing this I decided to be more open-minded on our next trip to Cracker Barrel which happened to be Sunday night.  It was pretty busy and there was a little bit of a lag making first contact with our server. By the time she came, we were ready to order.  Chris ordered the chicken salad sandwich on sourdough with vegetable soup (and a Coke).  I had the Homestyle Chicken which is the Sunday special. You get chicken breasts dipped in buttermilk and batter then fried.  It comes with cornbread or biscuits plus two side items. I picked the mashed potatoes with gravy and corn.  And I ordered a diet coke.

Chris’s soup and our drinks came out pretty fast.  The soups for Sunday were vegetable and vegetable beef. Even though Chris ordered vegetable, she accidentally brought the beef variety. He decided to eat it anyway as it probably wasn’t that much different.  And the best thing about the soup, according to Chris, is the crackers they serve. the “baked in Vermont” Westminster Squares which look like Saltines but are made with all-natural ingredients instead of high fructose corn syrup (original) or sodium stearoyl lactylate (fat-free).

While Chris ate his soup, I looked over the dessert menu. I wasn’t planning to order a dessert but I was curious about the offerings. Eating at Cracker Barrel is a lot like eating at a midwestern family supper table. And anyone who has eaten such a meal knows that there is usually a marshmallow/jello/cool whip dessert during the meal or at the end. In this area, Cracker Barrel is different than Sunday dinner at my grandma’s house. They have a Coca-Cola Chocolate cake, apple pie ala mode and other pie based desserts. No jello mashups in sight.

Our entrees came up shortly while Chris still had a little soup left. He seemed to like his sandwich and he ate it all down. I, on the other hand, was not going to be able to finish my meal. The mashed potatoes and gravy were served on a plate with the the biggest chicken breast I’ve ever seen, plus, a more normal sized chicken breast. The corn was in a little dish on the side. I know the gravy was “just” for the mashed potatoes but I would have preferred more so I could mix my corn and chicken in too. I’m sure if I’d asked, they would have given me a saucer full.

Side Note: My preferred Thanksgiving Day plate consists of turkey, stuffing, mashed potatoes and corn with plenty of gravy.

Everything was very tasty, the chicken was moist inside and the buttermilk batter was crispy and flavorful. I saved the steroidal breast to take home along with the corn muffins that came on the side.

Our bill, before tip, was just under $20. Definitely a good deal.

The next day, I took the muffins and chicken to work for lunch. I tried to take a picture of the chicken. It doesn’t really do it justice but you can sort of get an idea of scale by comparing it to the corn muffin. 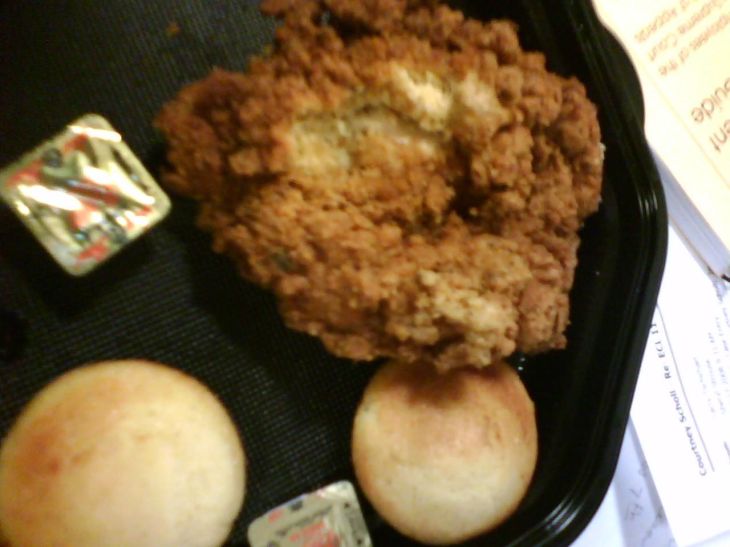 Cracker Barrel has a Books on Tape program where you buy an audio book at one location and then you can return it at the next stop on your road trip(s) minus $3.49 per week rental fee. Interesting idea for regular Barrel diners who also travel a lot.

View all posts by Courtney

Bites on the go