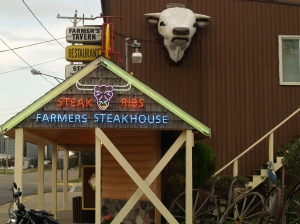 Came home from work on Friday and Chris had “planned” dinner. As usual, with his surprises, he won’t tell me where we are going. I finally got a name out of him but he told me Grand Ledge. This little restaurant is actually in Mulliken, 7ish miles west of Grand Ledge off M-43. There is a sign out on M-43 but the restaurant itself is in downtown Mulliken. Downtown being a stretch.

The name pretty much says it all. This place serves steaks. They also have ribs and one chicken dinner. Pizza too. Chris ordered the ribs, which happened to be the special. Dinners come with choice of potato (or onion rings) and salad or coleslaw. I ordered a chicken sandwich, came with chips. Chris picked baked potato and coleslaw with the understanding I would eat his slaw. We also ordered our usual Coke/Diet Coke. Oddly, you can also get caffeine-free Diet Pepsi here.

We initially sat inside. The interior walls are covered from top to bottom with memorbilia. Some of it looks like garage sale finds. Other stuff is very cool. You can spend the time waiting for your food looking at everything. Check out the ceiling too. This will prove useful as they are kind of slow with bringing food to the table. As it happens, Chris was feeling warm so we decided to sit outside instead. I used this as an opportunity to take some macro pictures for my textures collection. The courtyard area and exterior walls are also filled with “stuff” including old farm implements, a firehose reel (with hose), even a rusty suit of armor. There is a collection of cast iron pans (probably still usable with a bit of seasoning) and license plates on the walls.

While I entertained myself with photography, Chris had a drink from the bar. He said it was cheap which I presume to mean inexpensive and not low-grade. Eventually, our food arrived. We never did get the coleslaw for Chris’s dinner but the garlic toast he wanted came on teh side along with a nice sized slab of ribs and a baked potato. I would tell you how the ribs tasted but I was not given an opportunity to try them. I barely saw them before his plate was a pile of stripped-down bones.

My chicken sandwich was, quite frankly, strange. It was definitely not a whole breast of chicken, battered and fried, more like chopped breast meat, formed and fried. But not like any other I’d seen before. It tasted fine, it just wasn’t that exciting. Served with thin cut bagged potato chips. I should have ordered the chicken dinner, I just didn’t think I was that hungry.

The tail end of our meal was a little rushed as it was now after 8pm and as the sun went down, the mosquitoes were coming out: the downside of al fresco dining in the country.

Our total bill was $31 including tip. Considering that included alcoholic beverages, I’d call that a real deal!
Service was slow but the waitress was very friendly.

Post-dinner we drove around the area a little bit and stumbled upon a hot air balloon landing for the night. The “show” part of dinner and show, then, was watching the team deflate and pack up the balloon.

Hours: Open 7 days, until 10pm Friday and Saturday. I’m not sure of their weekday hours.

One thought on “Farmer’s Steakhouse, Mulliken”